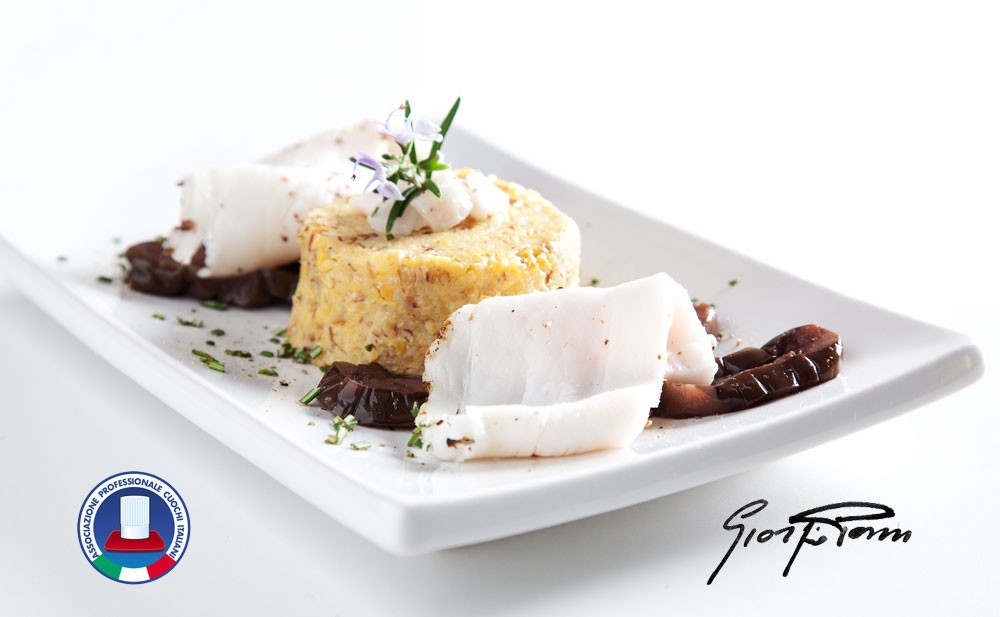 Boil for one hour water, milk, butter and salt. Add organic corn flour, making sure that no lumps are formed (use a whisk).
Stir frequently to prevent it sticking, this organic flour tends to stick to the bottom of the pan more quickly.
Once cooked, place in an oiled mould and let it sit for a few minutes.
Meanwhile, arrange the dish with Eggplants and slices of Juniper Lard as in the picture.
Overlap the mould of polenta, dig a small hole and insert the fried Juniper Lard.
Garnish and serve.

FINE-GROUND ORGANIC WHOLEMEAL MAIZE FLOUR
The Agricultural Farm Tenuta Castello covers a surface of 320 hectares, mostly dedicated to rice cultivation. The remaining areas are devoted to spelt, corn and poplars. A family-run business: from the preparation of the soil up to the harvesting, processing and packaging. Made from premium varieties of red maize like Marano, Astico and Quattro File, fine-ground to obtain not only a good polenta but also for various other recipes: desserts, focaccia bread, normal bread or breadsticks. This fine ground maize flour gives a harder polenta that is more suitable for the cakes of polenta that are served grilled with various meat and game dishes.

VALLE D’AOSTA JUNIPER LARD
The Juniper Lard is a typical product of Valle d’Aosta pork curing. Also called “Lard Douce de Boursa”
it is produced in St. Rhemy en Bosses territory, where the famous PDO Jambon de Bosses is produced too. The cured pig’s fat is usually obtained from the back of big animals, more than 200 kg. Cut into rectangular slabs, skin removed, is then dry-spiced with salt and juniper.
Differently from the more famous Lard d’Arnad, the De Bosses juniper lard is dry-salted, no brine is used, resulting in a far less salty cured meat.

EGGPLANTS IN OLIVE OIL WITH GARLIC AND BAY LEAVES
The name SI.GI. has been written in the Gambero Rosso golden book of the Italian Food Excellence The search for and recoup of forgotten fruits. Organic farming methods, which guarantee the purity of raw materials. Natural, manual processing that fully respects seasonal cycles. Traditional cooking methods such as boiling in an open pot.. this is SI.GI. Thanks to their work, long-forgotten fruits and processes have been rediscovered. These Eggplants are cut by hand to avoid damaging the vegetable: the knife is the only utensil that does not damage the compactness and body of the flesh, preventing it from becoming mushy during cooking. A special final product: compact, soft and flavoured only with traditional aromas: garlic and bay leaves. These eggplants are good as a savoury snack, tasty on bread and crackers, and a great appetizer.